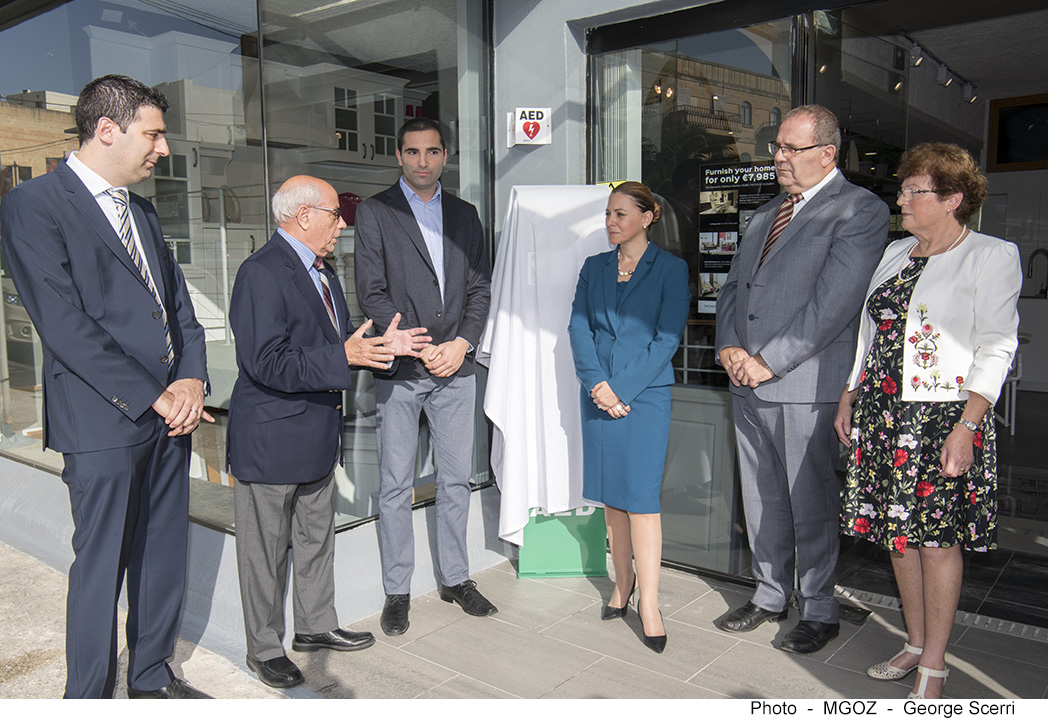 The Friends of the Sick and the Elderly in Gozo (FSEG) has supported a Gozitan business in making available to the general public, two Automatic External Defibrillators (AEDs).

Earlier this year, Distinct Homes Limited approached the FSEG with its wish to install an AED outside each of its showrooms – one in Gozo and another in Malta – which lie on main roads that daily see a substantial amount of traffic and people passing through. The equipment is a contribution towards the community the business is established in, and has been installed in a prominent external area for use by the general public. This is the first time that a private entity, on its own, invests in equipment such as an AED for use by the public.

One AED has now been installed on Pope John Paul II Street in Victoria, Gozo and a second one is in the process of being installed in Mdina Road, Attard. The company intends to organise demonstration sessions of how the equipment works, which will be available free of charge to the general public. More information will be published in due course.

The FSEG immediately supported this initiative and encourages other businesses, organisations and entities to contribute towards the most vulnerable in the community.

Used in the first minutes after a cardiac arrest, an AED can make the difference between life and death. It is an easy to use portable tool that provides a step-by-step vocal guidance and can be used by persons outside the medical field.

The equipment was inaugurated by the Hon. Dr Justyne Caruana, Minister for Gozo, earlier this month.

Dr John B Pace, on behalf of the FSEG, said that saving lives is the most important way that the organisation can help the sick and the elderly and AEDs are safe life-savers even in the hands of non-medical people.

In its quest for the wellbeing of the sick and the elderly in Gozo, the FSEG welcomes and supports such community care initiatives and eagerly encourages other businesses in Gozo to take similar endeavours for the benefit of the population at large.

The FSEG has been providing several services on a voluntary basis for more than 30 years, including equipment on loan, such as mechanized beds and other tools, to improve the day-to-day care and comfort of the sick and the elderly in their private homes.

There are no up-coming events

Are you a Member?

We welcome new members. Membership costs just €5 p/a or €50 for life.  If you would like to contribute and become a member then please contact us

You can read our published statute in English or Maltese:

The statute documents are published in PDF format.